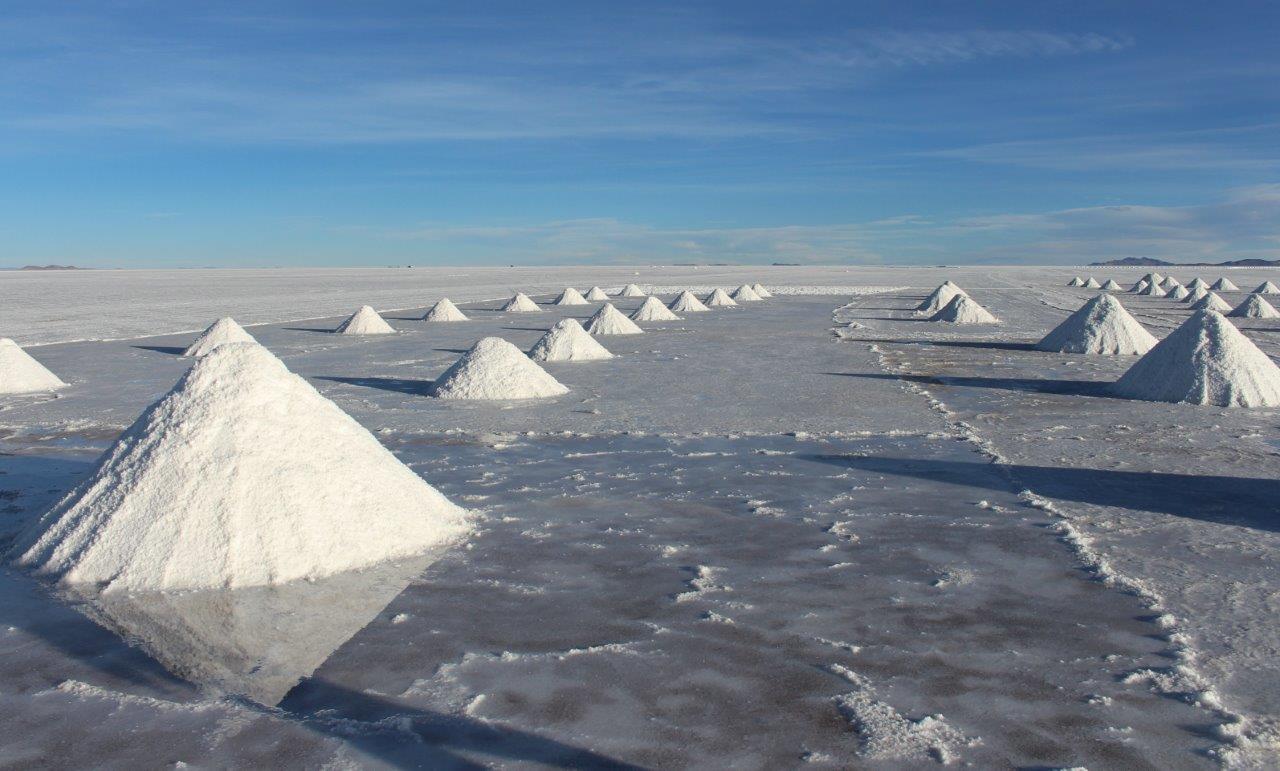 We had barely arrived and we booked an activity for sunset at Salar de Uyuni. This was something we had wanted to do in the Atacama Desert, but it seemed to be one of the best things to do in Uyuni and we decided to go for it. 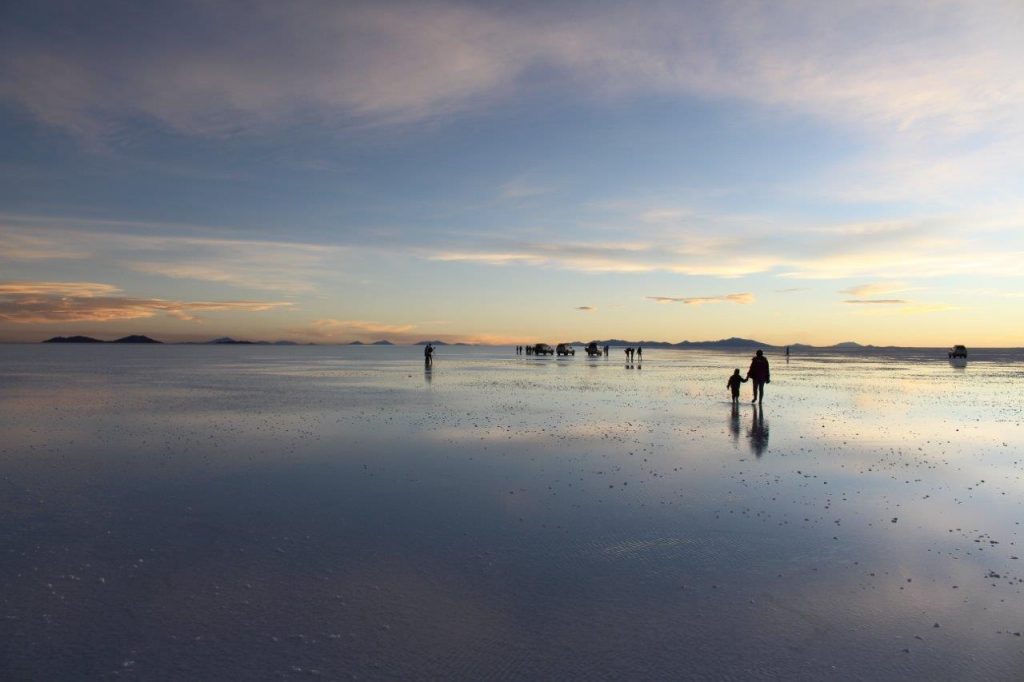 Our overnight journey from La Paz to Salar de Uyuni

But our journey actually started the night before. We were in La Paz, ready to start our trip, and at the bus station we were informed that there were some road blocks in Uyuni and that the trip was cancelled. I was still trying to absorb that information while the lady from the bus company gave me a full refund for the fare.

Now what were we supposed to do? We had our backpacks and luggage there, we had checked out of the hotel, and now it seemed that we needed to check in again …

I tried to check with other bus companies and the answer was the same: “There are road blocks in Uyuni and we can’t drive”.

But when all hope was lost we found one company that was willing to go a different way and could take us to Uyuni. It was a bit risky, but we saw some other tourists booking the same trip and also met one person from Germany who later followed us on our tour to San Pedro de Atacama. She was also not sure this was the best thing to do but had a ticket. This encouraged us a bit more and we said why not? 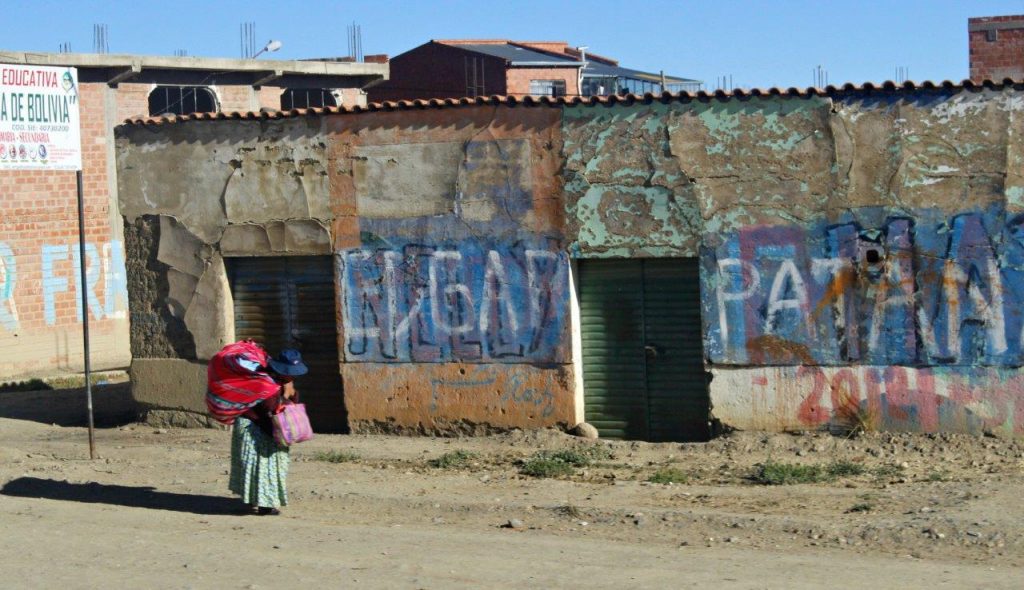 The buses in Bolivia are far less modern than in Peru. The roads also don’t help much, or at least for the first few hours of our trip we were on extremely bumpy roads. The outskirts of La Paz are chaotic in terms of traffic, and it took us a long time to reach an empty road.

But there we were, on the bus, heading towards one of the stops that we most wanted to visit on our world trip so far: Salar de Uyuni.

We were still surprised how well Noah was coping with the trips and the 3 weeks full of things to do. He got to play a bit, paint, talk and even sing a bit on the bus during the trip, and that kept him occupied till he got tired and slept. Ruth and I took a bit longer to sleep because the road was really bad and all the shaking kept us awake. 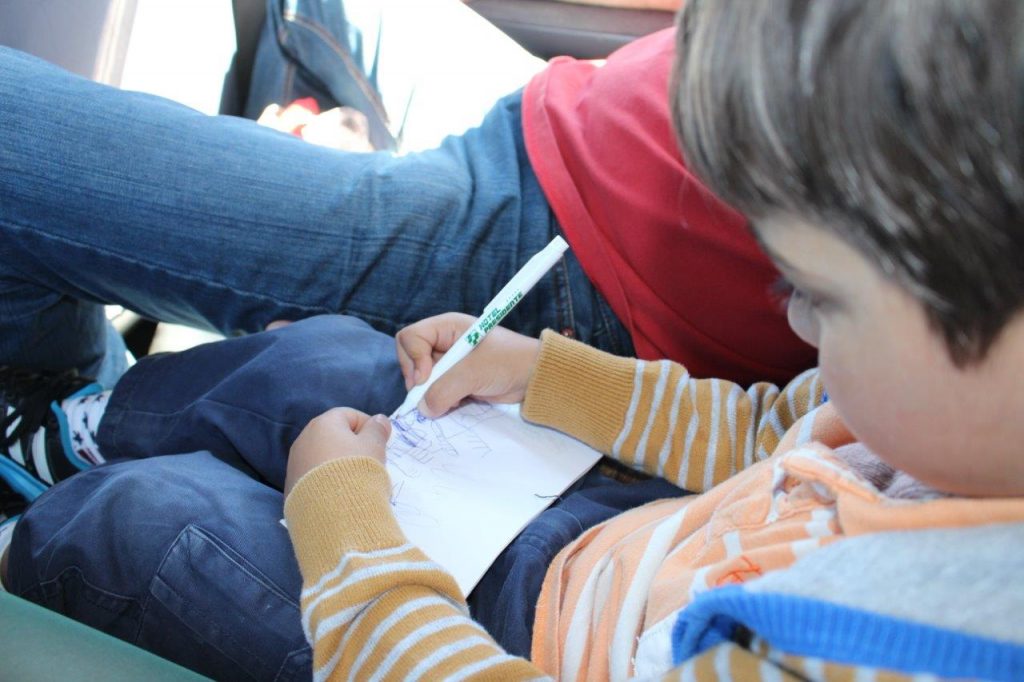 But then finally we slept and a few hours later the bus stopped for 20 minutes. It was a small place where we could buy some cookies and water, but the best part was the beautiful night sky, which was full of stars. It was a very cold night though.

So far, so good till the moment when we had to change buses. This was at about 4am and we didn’t know that this was going to be needed. It looked like we needed to get on a smaller bus so we could take a smaller road and avoid the blockages.

Again, it was a beautiful night, with a starry sky, but now we needed to go outside, cross the road, take our luggage with us and find space on the second bus. If the first bus was not ideal, the second was even worse. Noah was still able to sleep a bit more, but Ruth and I were completely uncomfortable in the cramped space with the weird smell (don’t ask me which smell!).

And we finally arrived in Uyuni …

Thankfully it was a shorter trip. Soon we arrived in Uyuni at almost 6am and we had an assignment – find a place to stay overnight. We could’ve booked in advance, but we guessed that it would be easier and cheaper to find a place there. We thought, initially, that we could arrive in Uyuni and immediately book our journey towards San Pedro de Atacama, but it would be very tough for Noah to arrive in the early hours and embark on another long journey straight away.

With almost everything still closed in the town, and with a few other people who were on the bus, we went to an internet café to search for accommodation.

Luckily we found a small hotel less than 100m from the café which was affordably priced and had a room that we could share with Magdalena, our German friend.

The place was good and the bedroom was comfortable, so this was the right choice. We got some rest and went downstairs to start searching for tours to the salar. 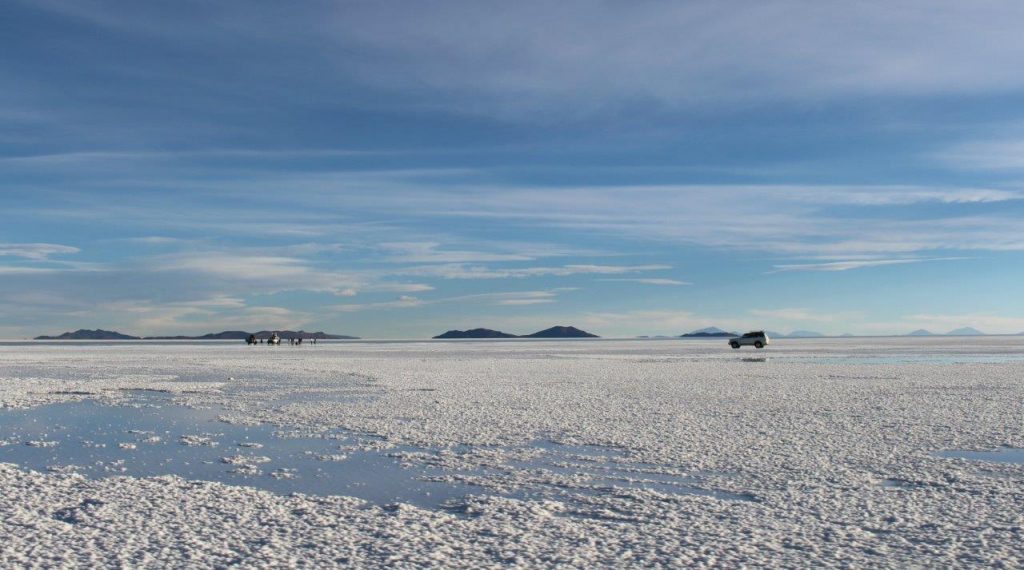 Next, finding a good company offering a tour to Salar de Uyuni

It looked like luck was on our side again. We found our friend May, from Taiwan, who we had met on the bus from Puno to Copacabana. She recommended a company that was very well known in Japan and that had good prices and full tours. 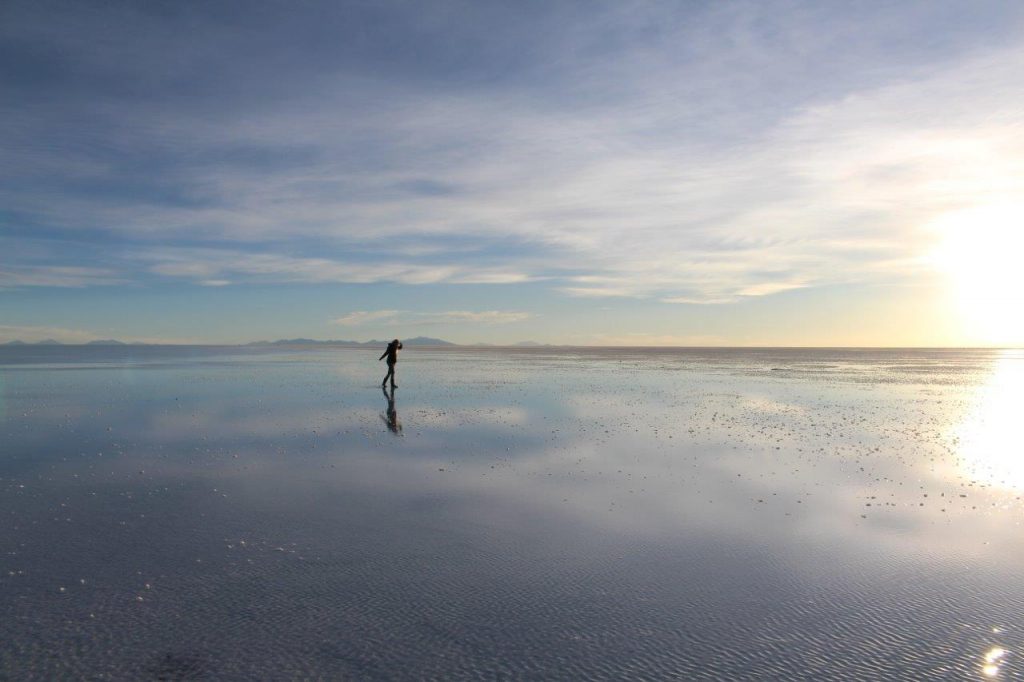 The best thing was that this company was located just 4 doors along from our hotel. Indeed, they offered very good tours at low prices.

One activity that caught our attention was the sunset and stargazing at the salar de Uyuni. BOB 115 per person for this activity sounded like a great deal (if the jeep was full, otherwise we needed to share the total price of BOB 800 among the people in the jeep or cancel). The activity would start at 3pm that same day and finish at 9pm. We had some time to rest, eat and take Noah to a park to play a bit.

Family Travel Secret
Again, just like in Peru we decided to risk it and not book a tour online. Prices online were very high, and this would certainly eat away at our budget. It is always best to go to those touristy places and search for some recommended companies offering activities. We found prices up to 2/3 lower than the ones offered online. 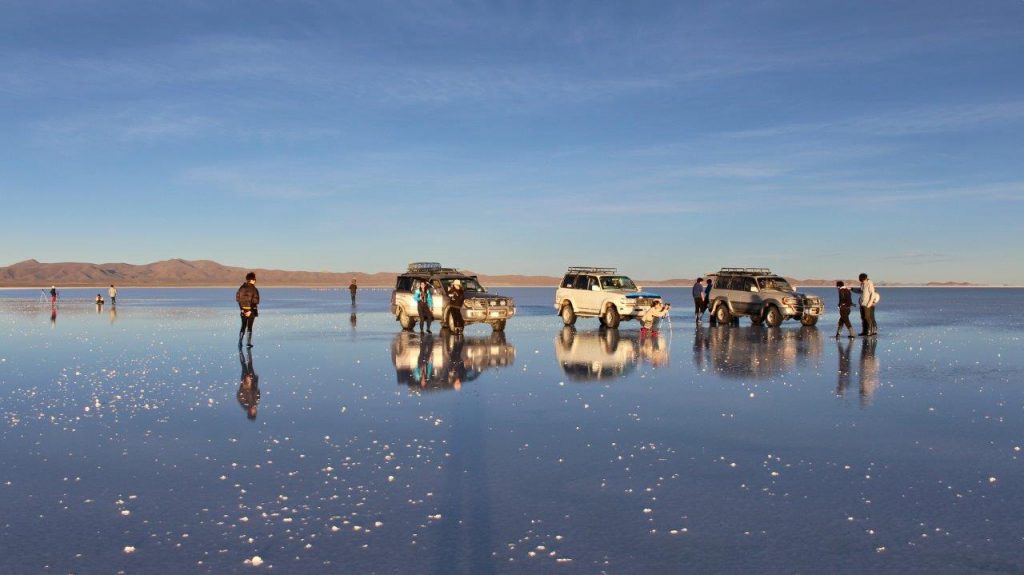 Magdalena also joined us and the jeep was full, so we did not need to pay more than the 115.

The only concern was the road block at Salar de Uyuni. It seemed there were some people that were not satisfied with the distribution of land in Uyuni and started a protest, followed by road blocks.

Our driver had to find different routes to avoid the blockages, and it was not easy. He drove for almost an hour longer than normal just to avoid cancelling the activity so we could go to Salar de Uyuni.

And it was worth it. He took us to a part that was wet, allowing us to take some beautiful pictures before and during the sunset. The pictures speak for themselves. 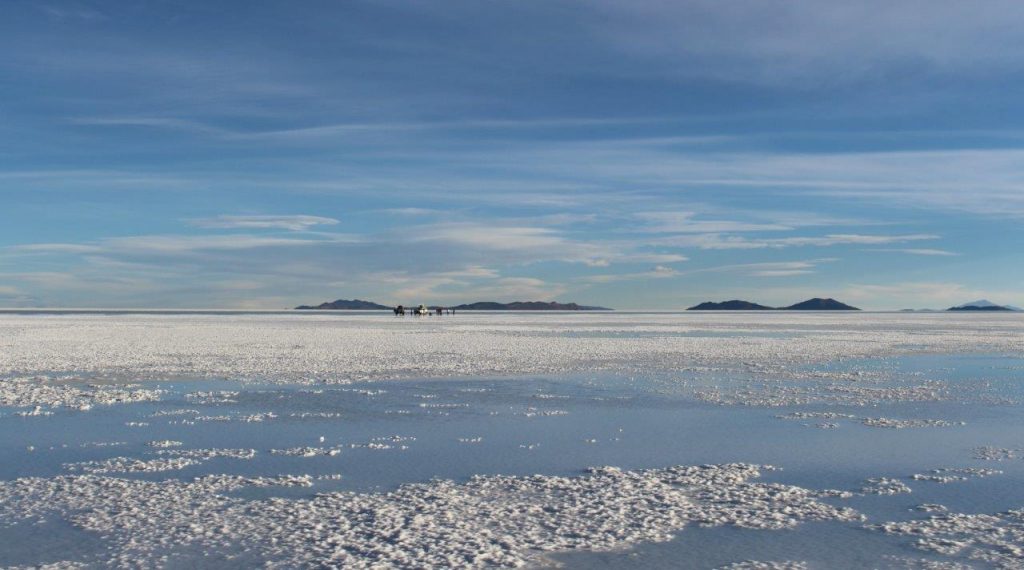 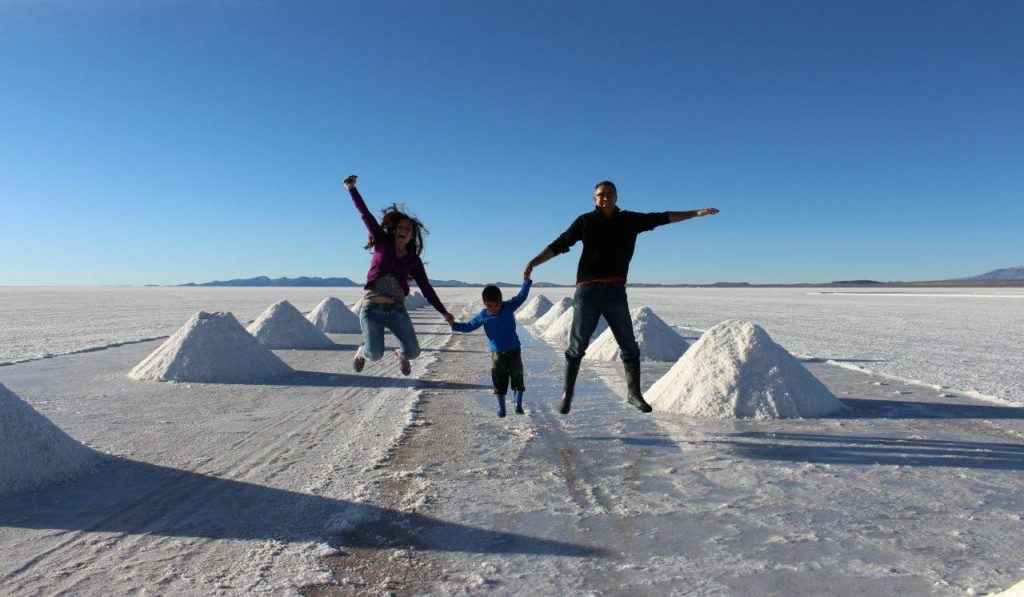 Noah enjoyed all the salt and water a lot, but his pants were soon wet from the cold water and, by mistake, we had not brought spare clothes for him. So during the stargazing he was inside the car with Ruth or myself, covered in our jackets. Of course he did not want to be there, but as it was cold some of the other people were also inside the car and they started playing with him. 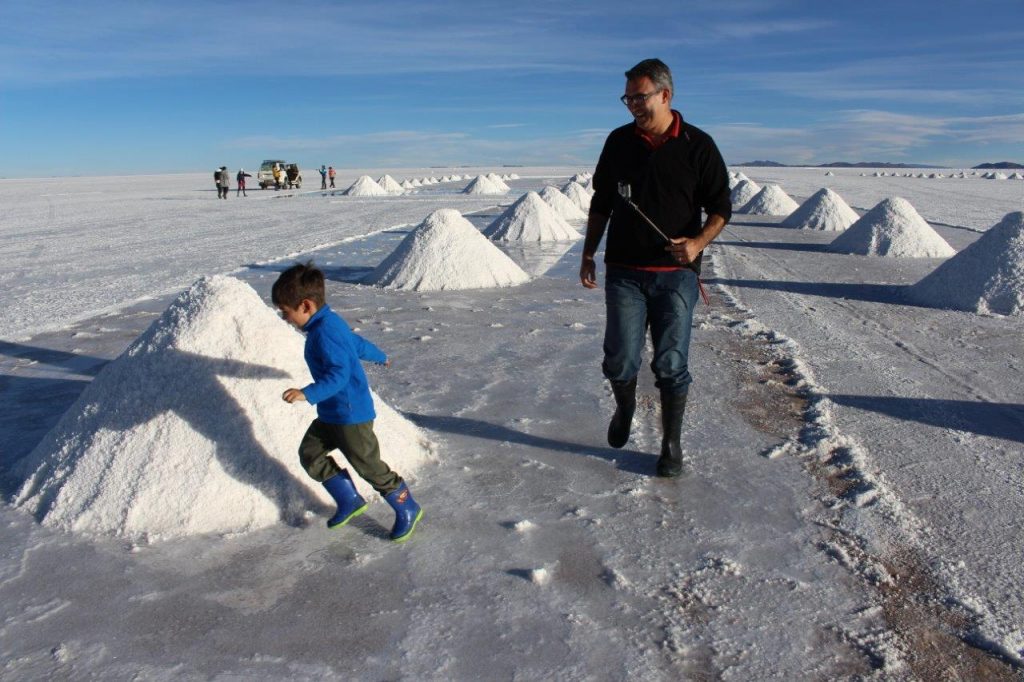 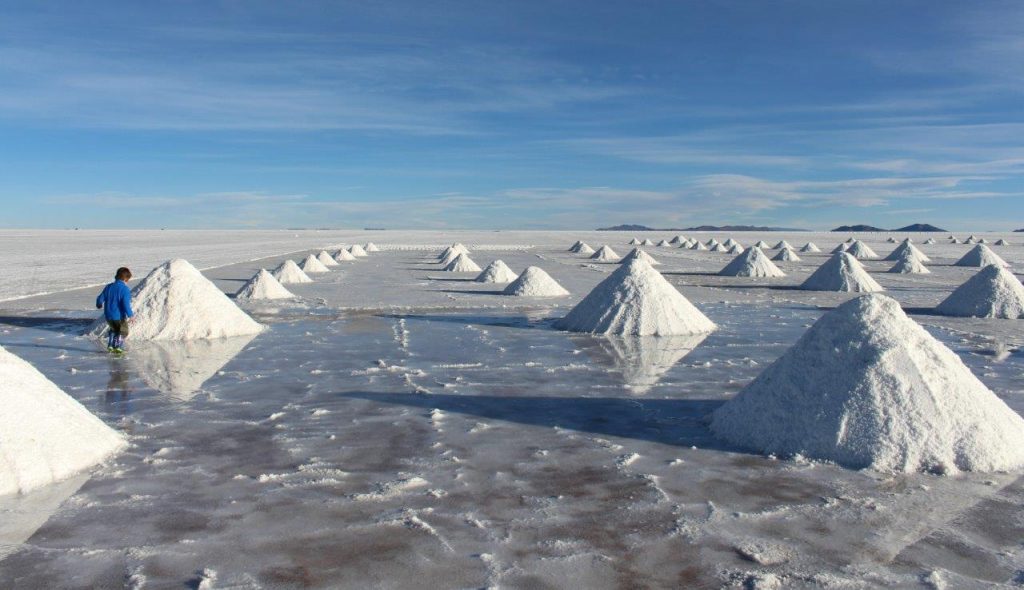 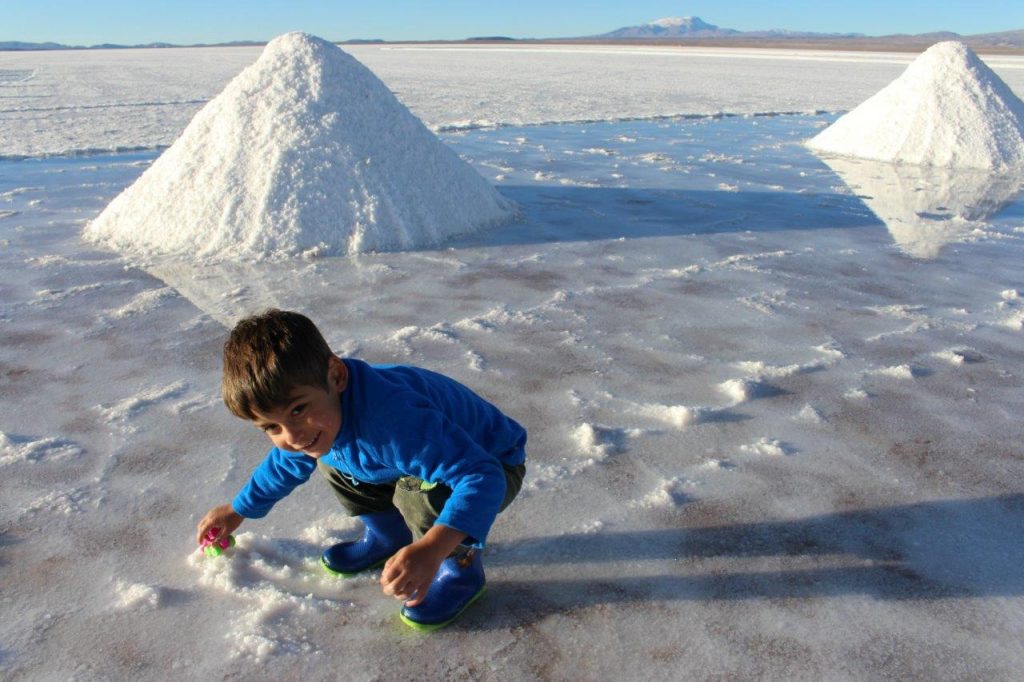 We watched the spectacle and a little after 7:30pm we started driving back to the hotel. 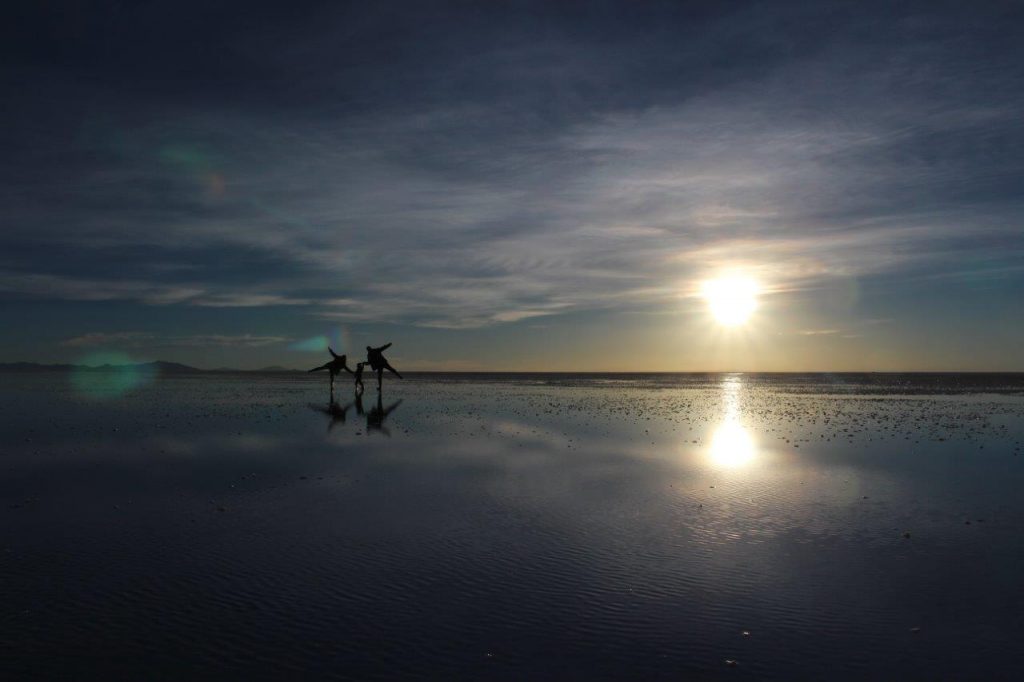 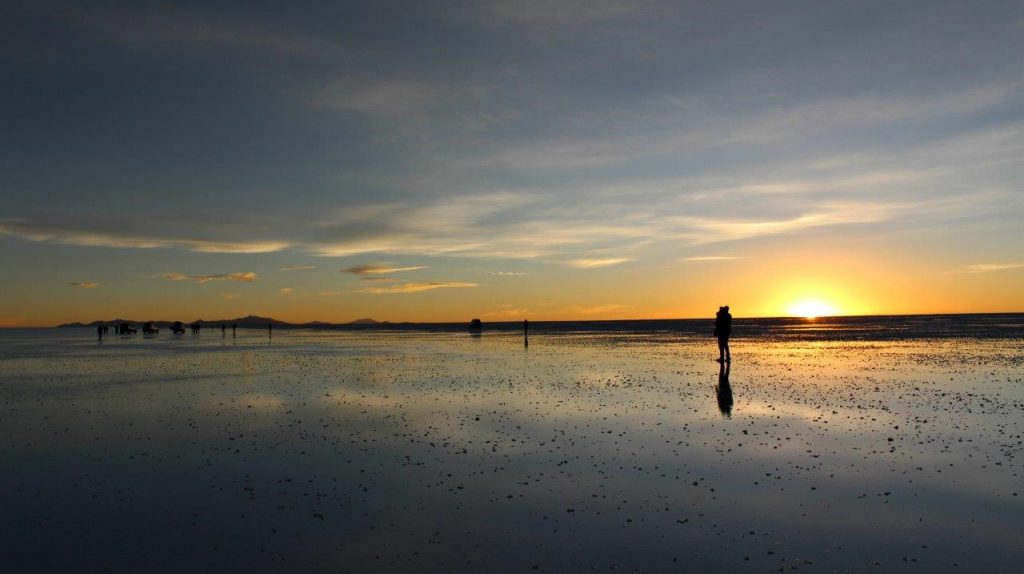 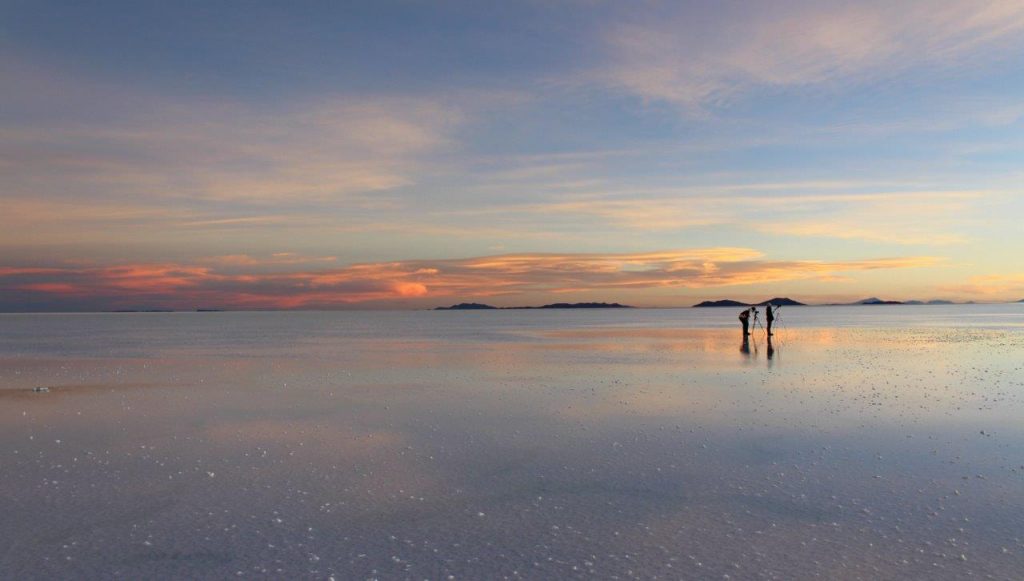 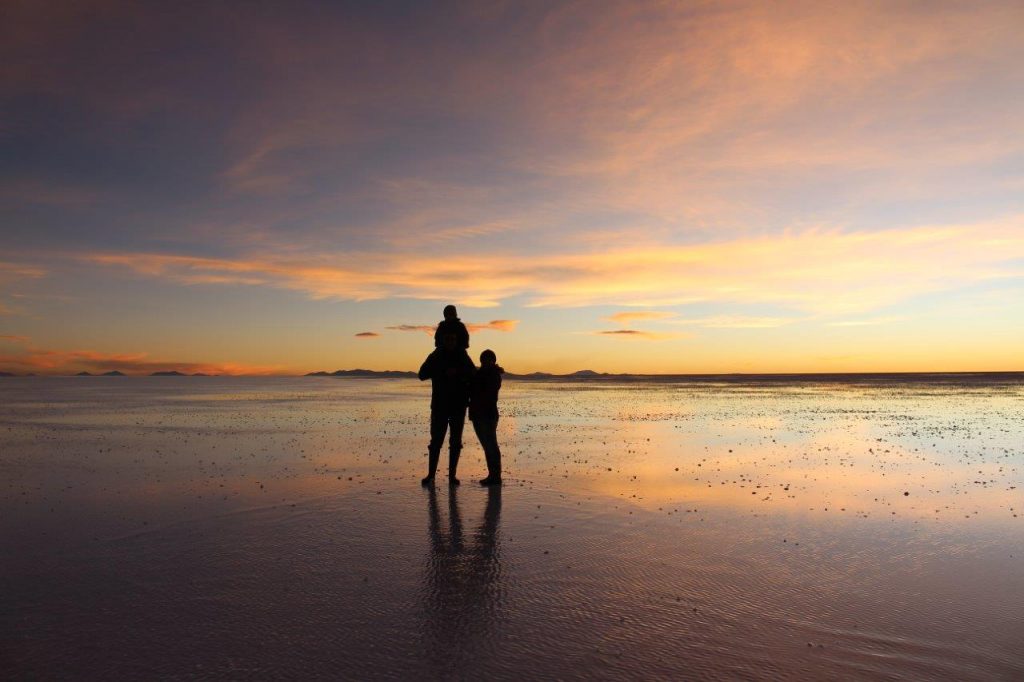 A perfect end to a perfect day. 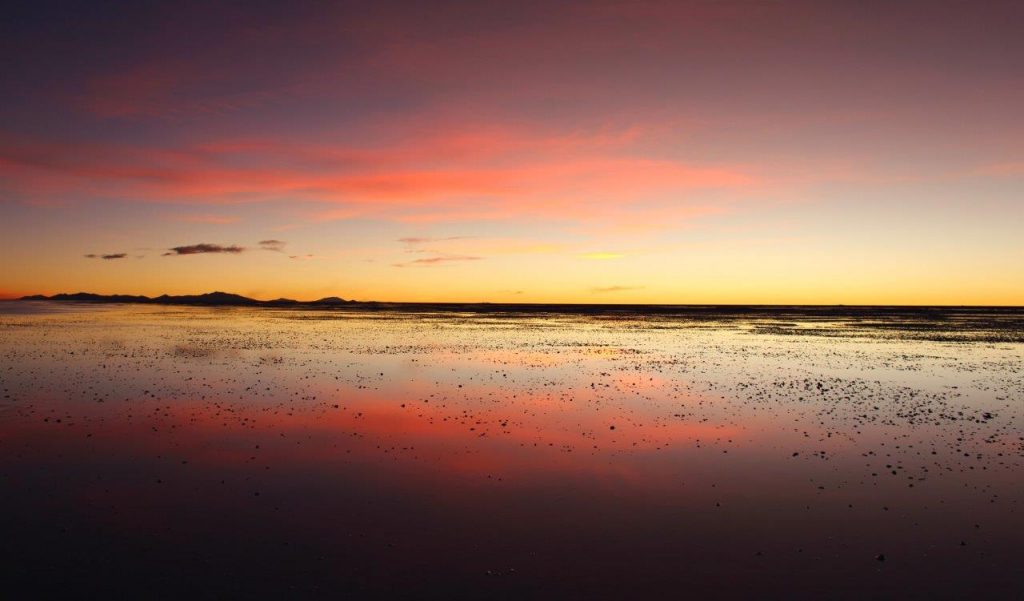 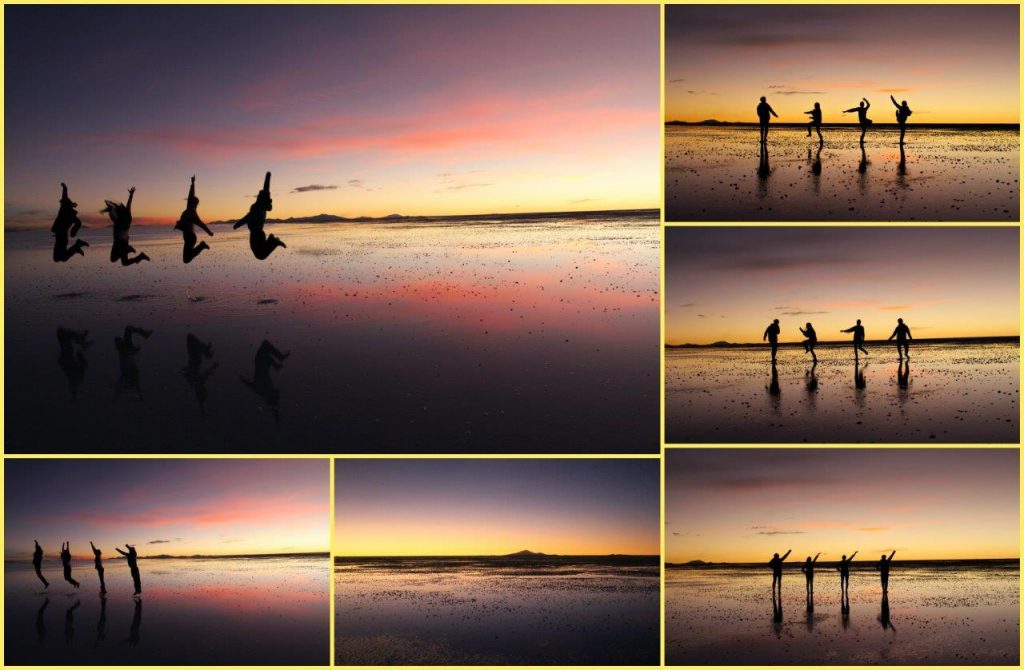 Next up, the trip from Uyuni to Atacama was awaiting us the next morning. 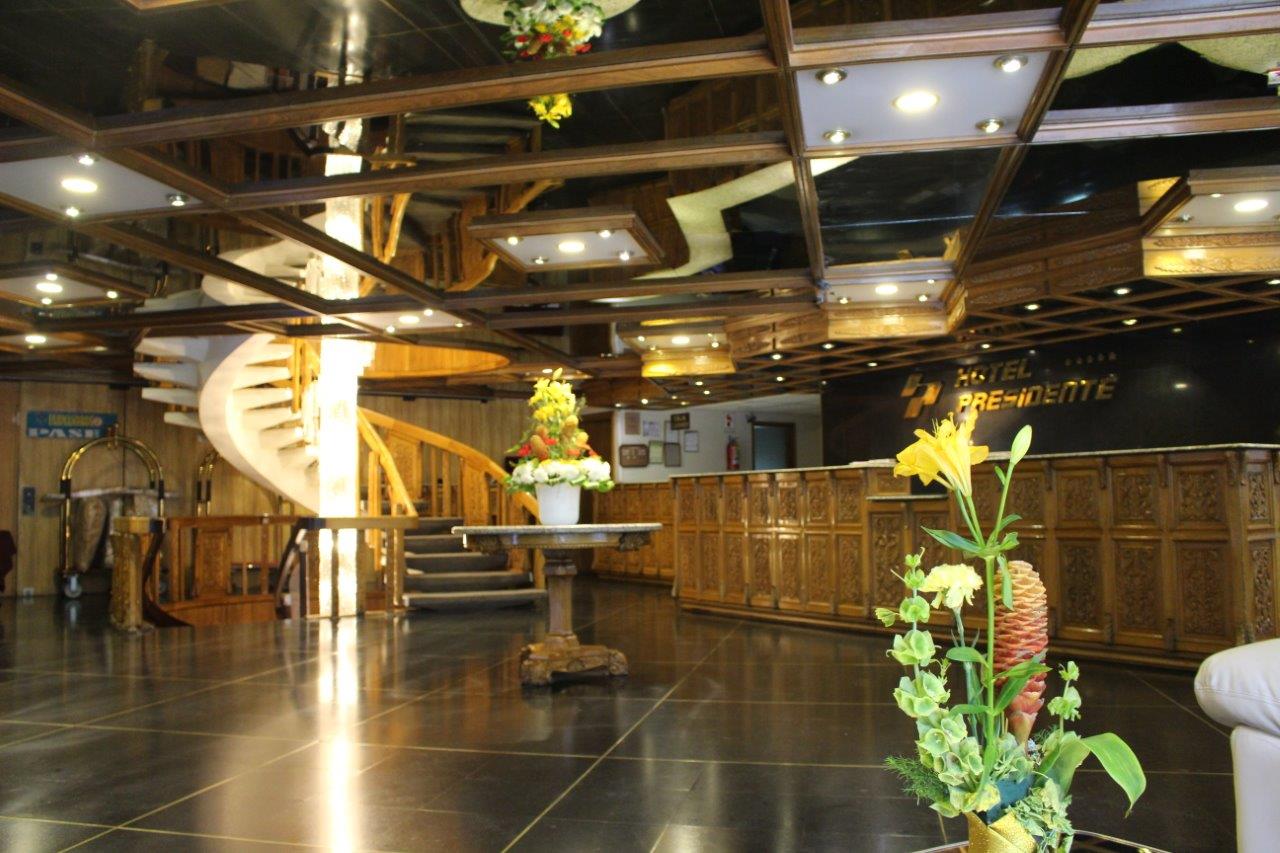 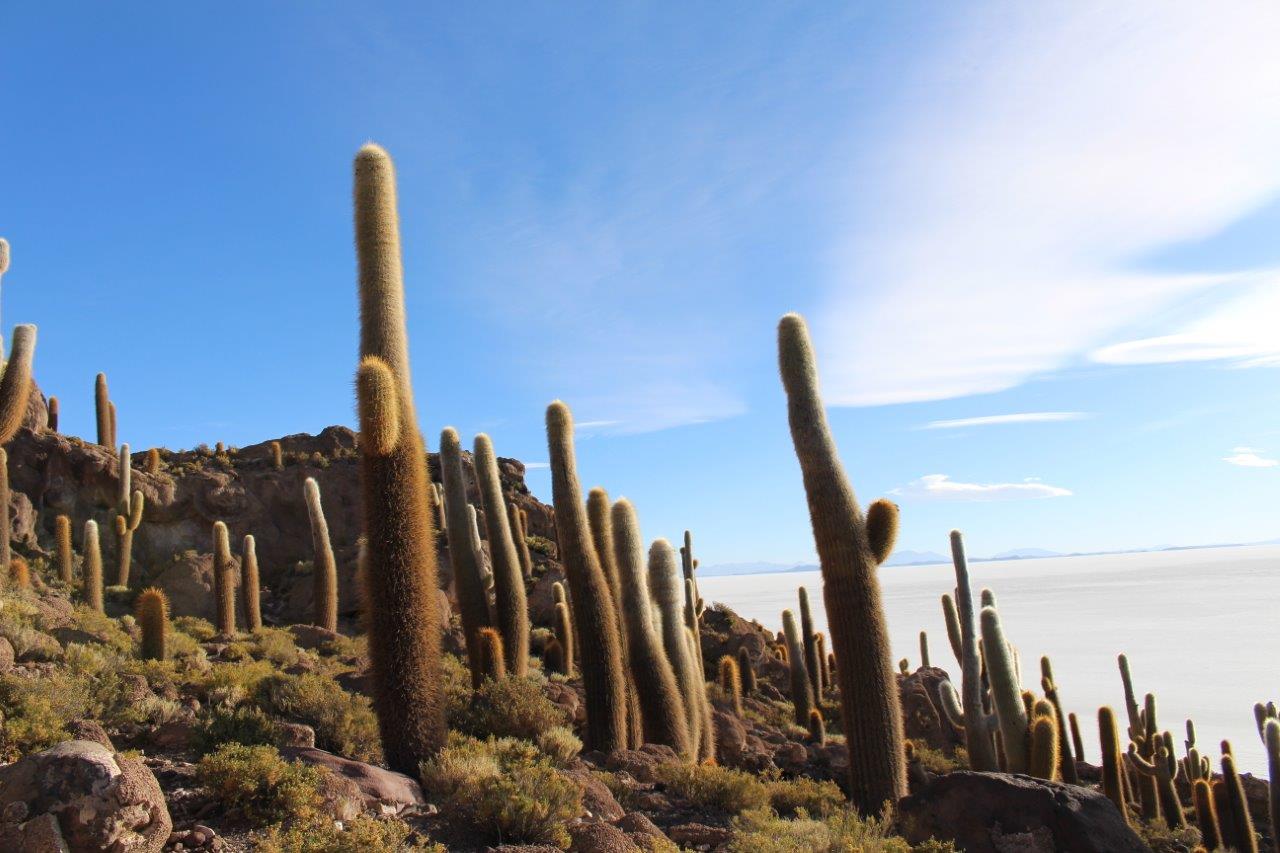 Uyuni to Atacama tour: 3 days on the road