After almost a year of travelling in search of hot climes, good weather and beaches – as well as numerous mountain walks and excursions – we found ourselves clamoring for something different… As such, the Siam Park water park we came across in Tenerife hit the spot!

We decided to spend the entire day at Siam Park with my cousin, Casandra. This was because I knew how keen and full of energy she’d be, and I could count on her to go with me on the more ‘dangerous’ rides 😊 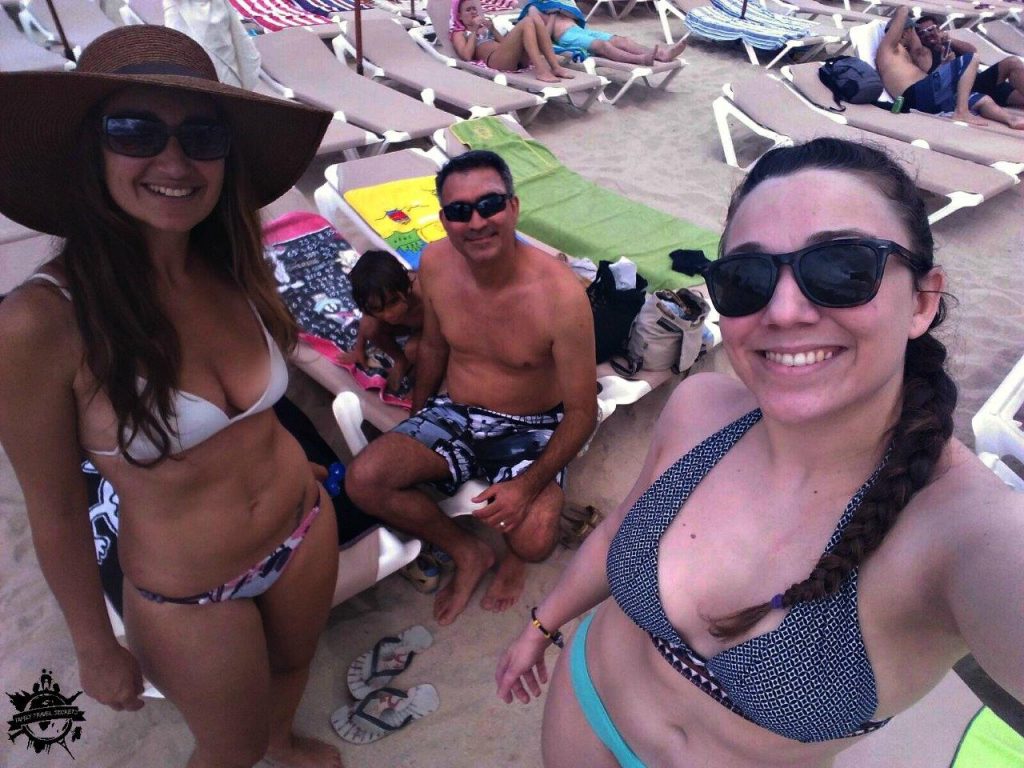 Fabio had already been to the park with Casandra and my other cousin, Mireya, when Noah was 5 months old. They had a great time, and I’ve been waiting a long while for my chance to go 😊 I had actually already visited Siam Park, but only because of work. While I was there it did seem like a brilliant place, and it’s easy to understand why it’s considered one of the best water parks in the world!

Family Travel Secret
Siam Park is, according to several well-known and trusted global websites, regarded as the best water park in the world.

As a lot of you already know, for this portion of our time in Tenerife we were staying in La Orotava, in the northern part of the island. Therefore when we fancied doing something in the South – where Siam Park is – we had to incorporate at least a one-hour journey into our schedule in order to get there.

We parked our car in Siam Park’s external parking lot (which only cost us €3 for the whole day), and we made our way to the entrance. Unfortunately, the weather forecast wasn’t looking great that day, but we’d already put off going to the park twice so we just put our faith in that the weather forecast might be wrong.

Family Travel Secret
Siam Park is in an area where it is almost always guaranteed to be sunny, although there are some rare occasions when it gets cloudy.

After we got into the park, we put our things in a locker and laid out our towels in the beach area. Noah was totally thrilled with the wave pool – which led to the poor lifeguard feeling quite nervous as the little one was hopping and skipping about in the water! 😊

It wasn’t very hot that day, so I found it quite difficult to motivate myself to get into the water – despite generally being a pretty positive person. Being at a water park on a cloudy day with a good chance of rain isn’t my thing. Noah doesn’t really care how sunny it is though – he gives off his own sunshine 😊 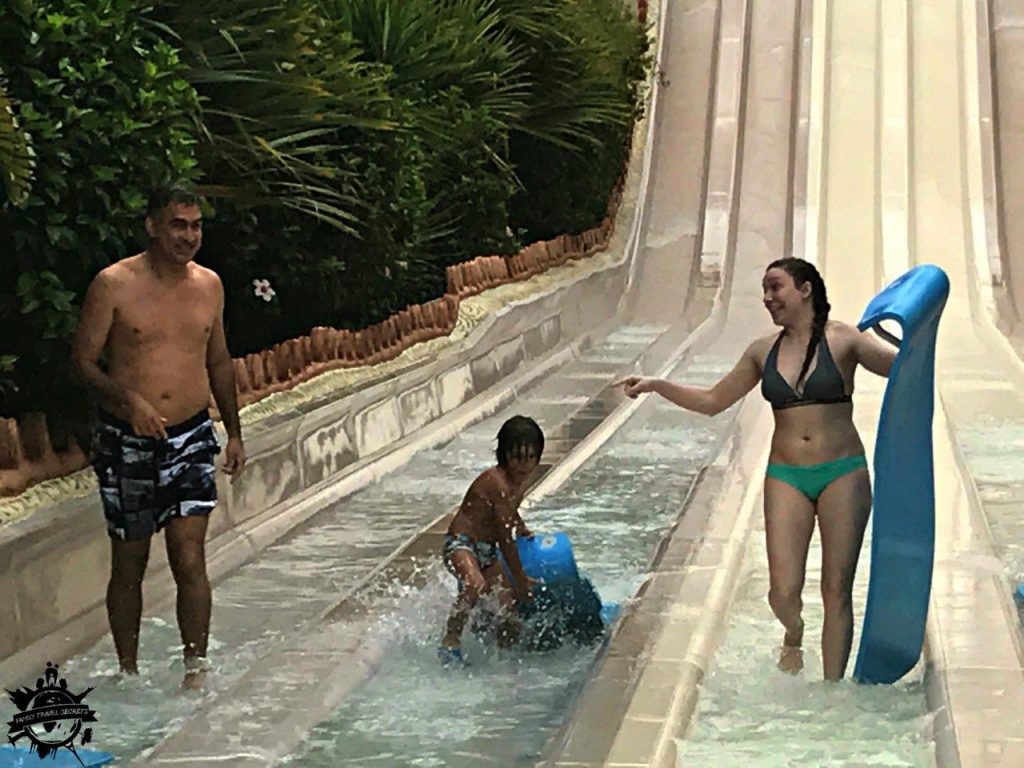 Family Travel Secret
The advantage of visiting Siam Park on a cloudy day is that you can walk around the entire park without your feet getting too hot on the tiled floor. Also, it’s likely that there will be fewer people, so the queues for the attractions are much shorter. 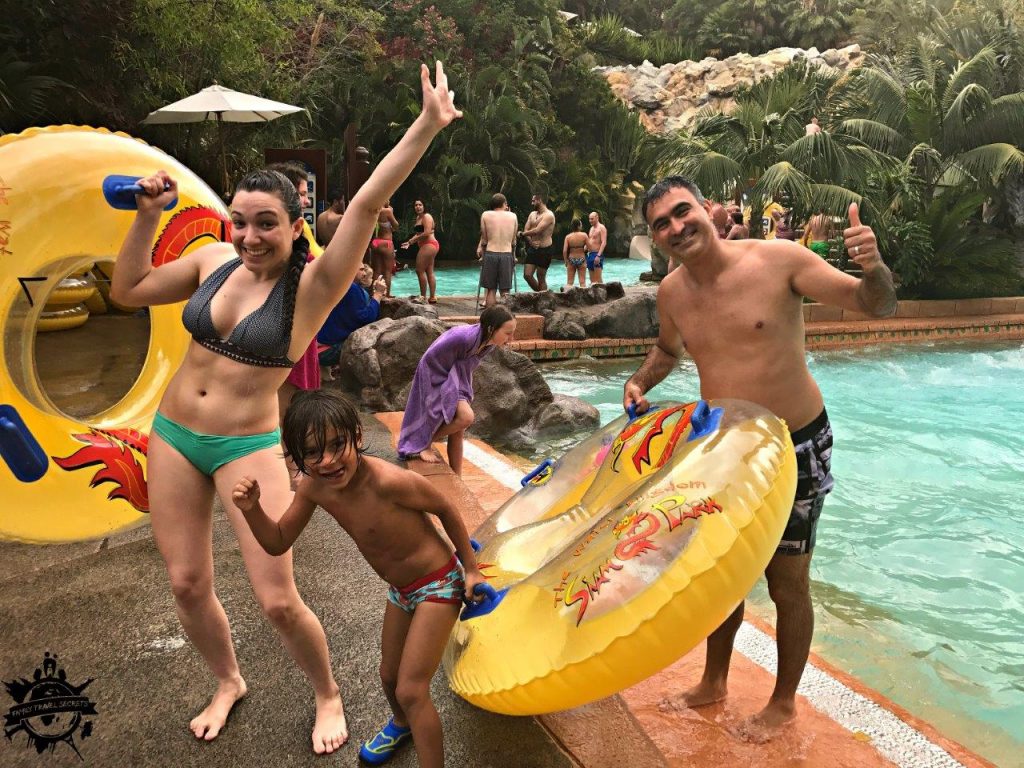 Our plan was to go on the rides that Noah was tall enough to go on (1.10m or less). We went on Naga Racer and Jungle Snakes, and we got to hear Noah laughing the entire time. Once he had tired himself out, Casandra and I went on The Gigant. 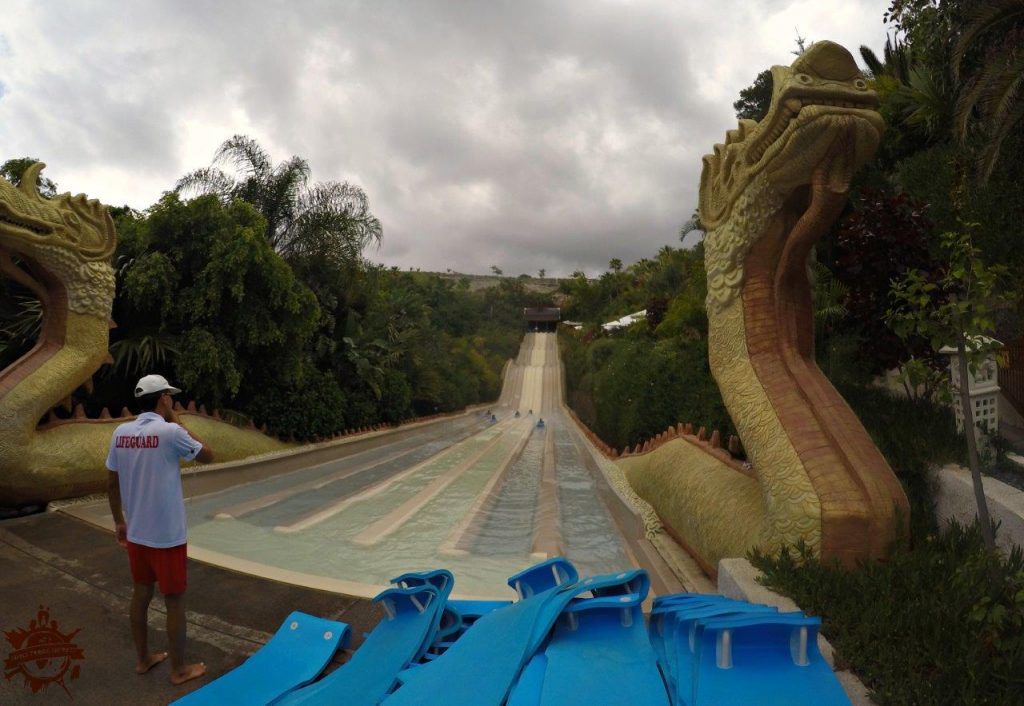 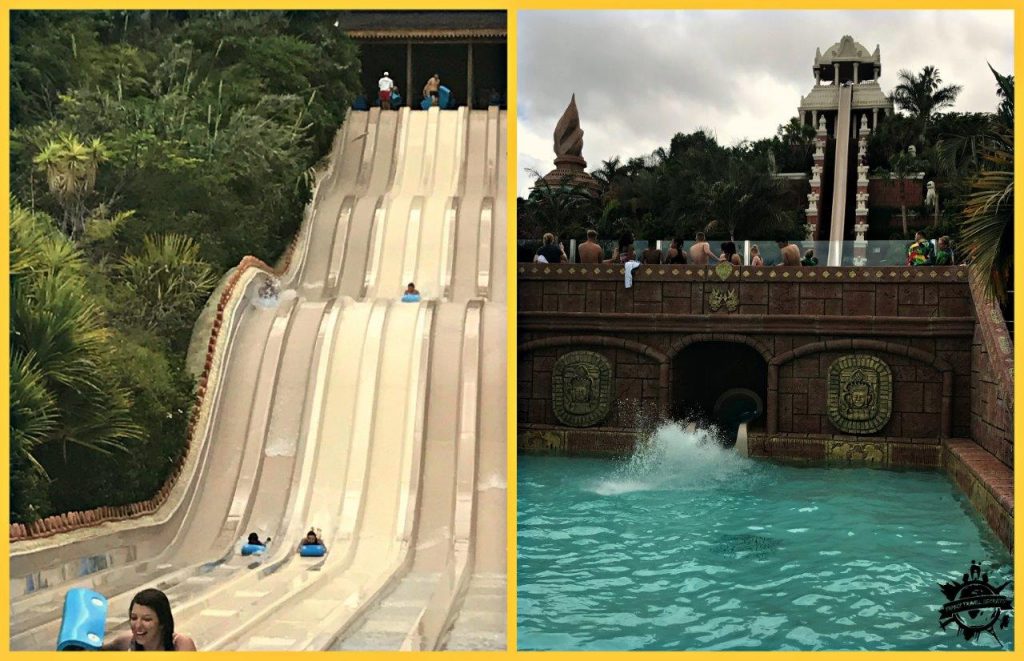 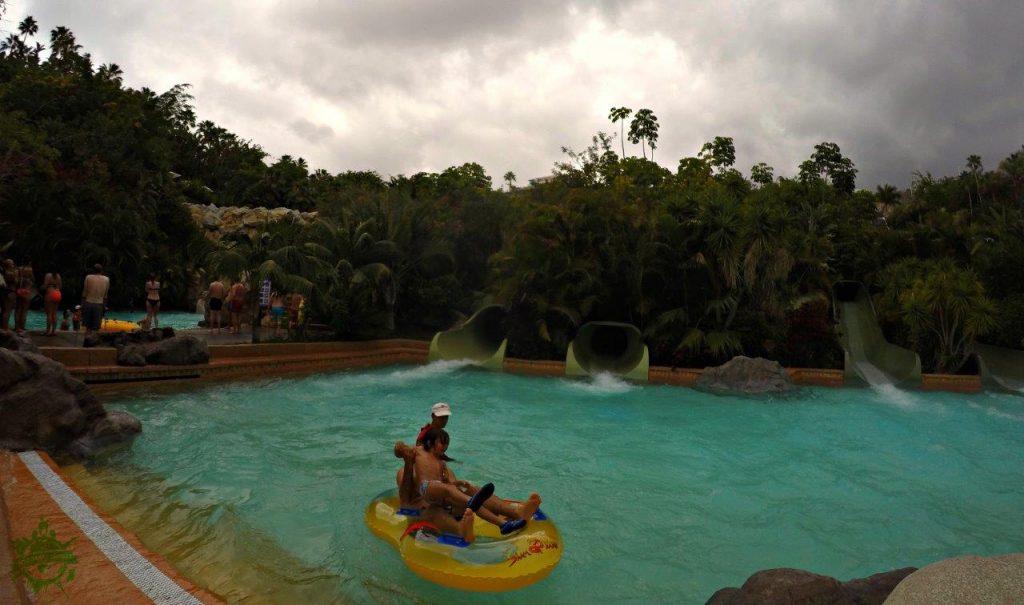 It was a real pity that Lost City Maha Chakri Sirindhorn was under maintenance … Noah would’ve loved it, due to the heights, toboggans and the large quantities of water to play in. 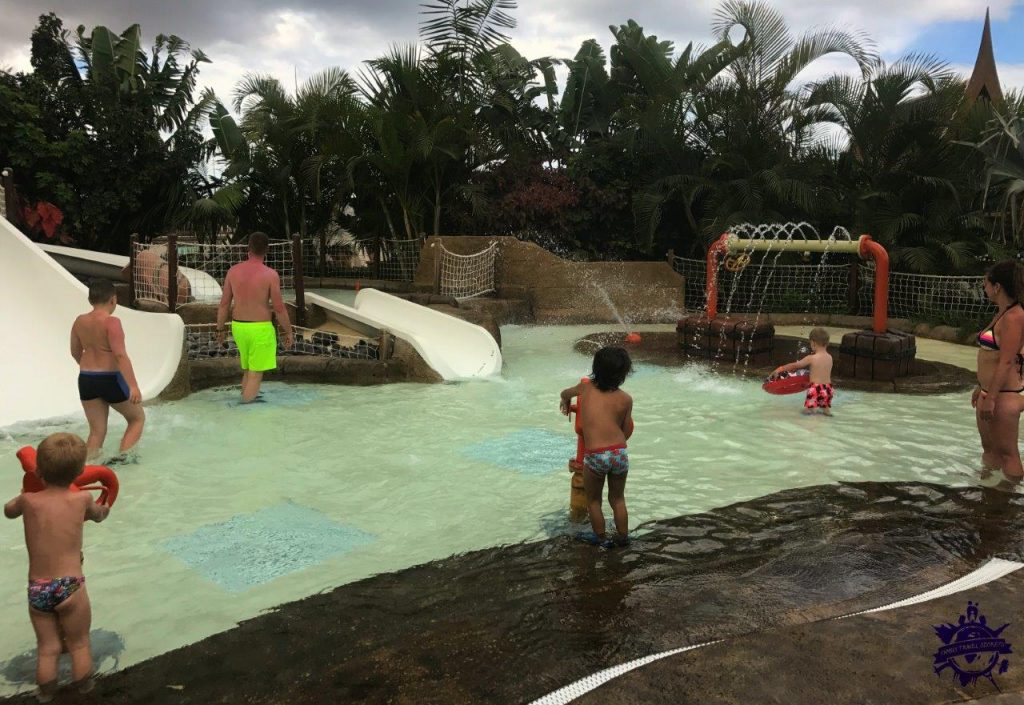 Family Travel Secret
The water in all of Siam Park’s attractions is heated, so you won’t be too cold when you get in.

Understandably, we all felt quite hungry after an action-packed day, so we had some food at the Beach Bar. It started to rain while we were there, so we decided that we’d enjoyed ourselves enough for one day at the park and that we could head back north without any regrets. 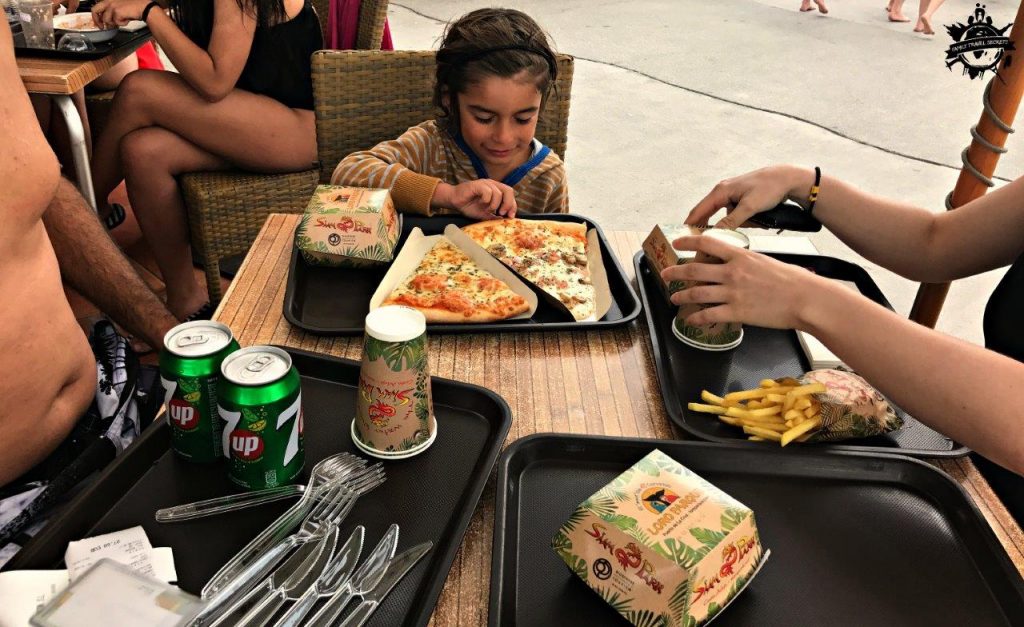 If it had been sunny, we’d obviously have stayed until 6pm (when the park closes) instead of until 4:30pm. Nevertheless, everyone enjoyed themselves a lot and we’re all clearly looking forward to the next time we get to go back to the park – especially to see what it’s like on a sunny day when it’s packed with people! 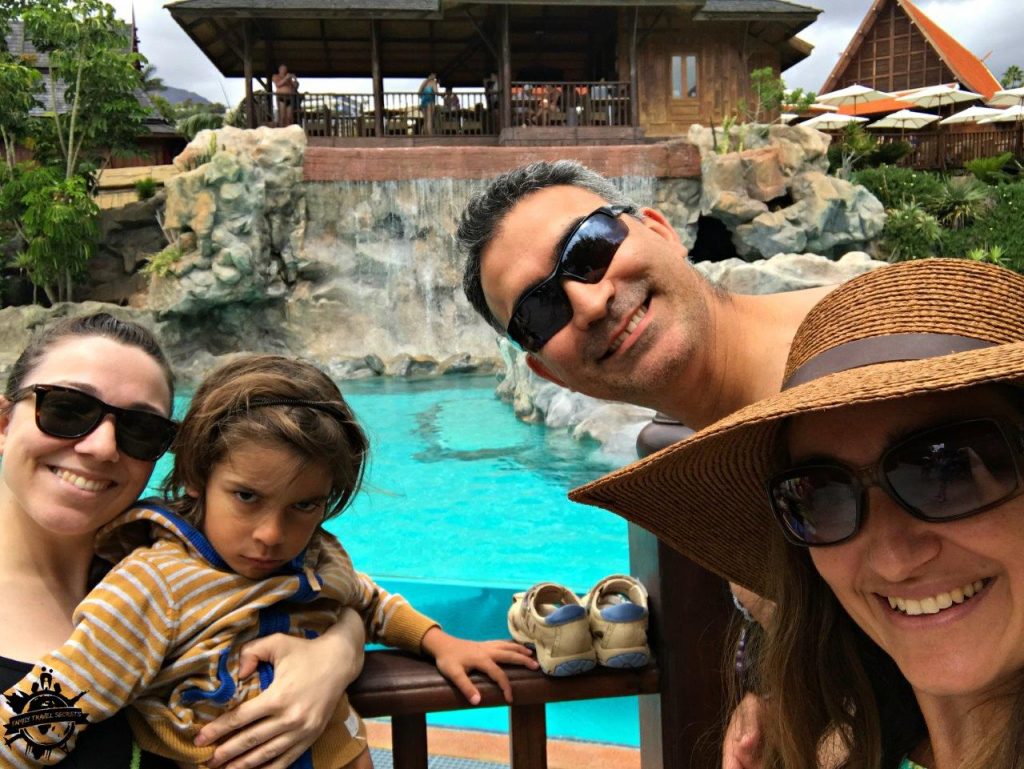